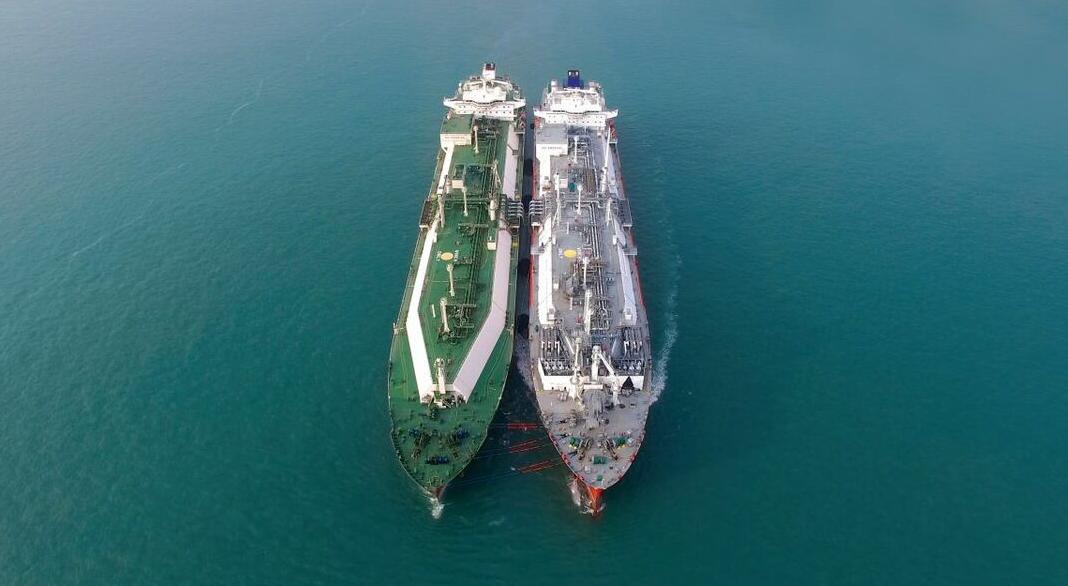 The Dark Interconnected World of the Illegal Oil Trade

A ship to ship transfer (STS) is the transfer of cargo from one ship to another at sea. While often legitimate in origin, these operations can also involve the transfer of sanctioned cargo or oil from a sanctioned ship or nation to a more reputable ship, which can then be passed off as legitimate. For example, sanctioned crude oil is transferred from ship to ship in the middle of the Mediterranean, to be illegally imported into the EU. One source estimates that 20% of the oil imported into Greece comes from these illicit sources.

Geollect has been collecting information on all STS events that have taken place in the world over the last 12 months, which will in time grow into a fully interactive and explorable service. The STS events included in the analysis in the subsequent graphics are focused on events involving two tankers that lasted for 6 hours or more.

The data has been combined with Geollects vessel of interest database, which includes vessels on the OFAC SDN list and vessels investigated by Geollect for sanctions evasion. Vessels are investigated for a wide range of reasons, ranging from STS operations with sanctioned vessels, to vessels which engage in AIS position spoofing to conceal sanction breaking activity.

In the above image, each region highlighted in orange shows an area identified as an area where STS activity for tankers commonly occurs in the Persian Gulf, derived using our state-of-the-art machine learning models trained with AIS data. Additional information is provided for each hotspot to show the breakdown of vessel flags involved in the events as well as the average duration of each STS event in that hotspot. These hotspots are used to provide important information to contextualise the operation of vessels.

We have been tracking tanker-tanker STS operations that have occurred over the last year and used that data to build a network map that shows the interconnectivity of the illegal oil trade. In this network, each point represents a unique tanker and each line represents an STS event, lasting at least 6 hours. The red points are vessels included in our vessel of interest database, the orange points are vessels of interest for an example customer e.g. a fleet of tankers covered by one insurer or operating within the territorial waters of a nation and finally the blue points represent the remaining tankers.

The purpose of this visualisation is to illustrate how this information can be used to monitor the exposure of a fleet of interest to the world of international oil sanctions evasion. Within this network are examples of an STS operation occurring between a sanctioned vessel and a member of the global fleet which then goes on to meet with a vessel of interest. This analysis allows us to not just investigate individual STS events, but chains and networks of STS events.

We find clear examples of blue points that exist as “middlemen” between legitimate vessels of interest (orange points) and vessels in Geollect’s vessel of interest database (red points).

This resource has proven invaluable to our investigations team, who take a data agnostic, all source approach to uncover all elements of nefarious activity and corroborate findings without any form of bias. We take a macro to micro approach: analysing networks, conducting link analysis and understanding beneficial ownership structures to establish pattern of life and corroborate this with individual vessel and fleet movements to complete the evidential loop. We structure intelligence, automate data collection processes and quality control the output so that decision makers can spend more time understanding the important choices which need making.

This shows our tanker STS network analysis map coloured by the locations of the STS operations. In this image each colour represents a different region of the world. Points that “sit” within the clusters of different colours represent vessels which move oil between regions via STS operations. Not included are subsequent port calls which would show how STS operations in one region can lead to oil being imported into another region. Such an analysis is part of our ongoing research so stay tuned. How does oil obtained via an STS operation in the Persian Gulf make it into the global supply chain?