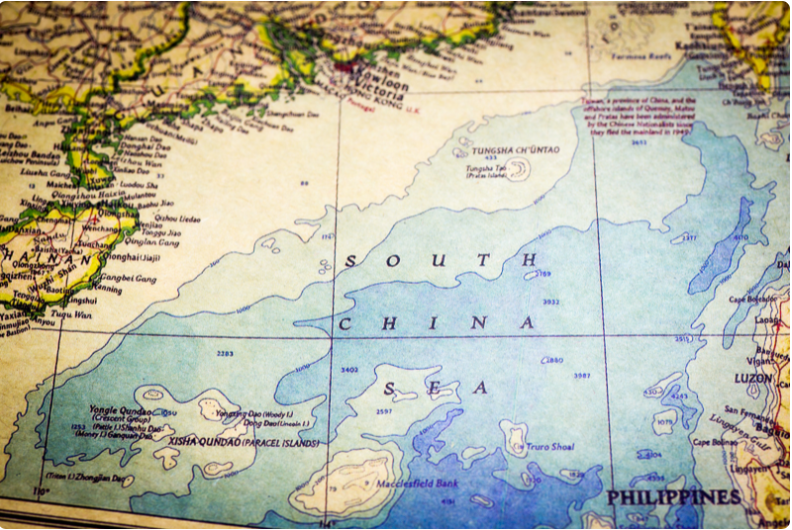 The Strategic Importance of the South China Sea

With the world’s eyes on the Russia/Ukraine conflict at the moment, tensions between China and Taiwan are bubbling away. As Russian troops and armoured vehicles rolled into Ukraine last month, nine Chinese aircraft entered Taiwan’s air defence zone, prompting a broadcast warning from the island nation. Now seems as good a time as any to explore the strategic significance of the South China Sea.

The conflict and tension over competing sovereignty claims in the South China Sea has grown considerably in the past 5-10 years. China has adopted an increasingly assertive posture towards its own claims by elevating it to a core interest, strengthening its fishery law enforcement and building civilian and military facilities in the disputed islands and waters. China’s rising military power and political influence is generating anxiety and suspicion among some of its neighbours and western powers. In particular, China’s growing assertiveness over sovereignty and maritime rights in the South China Sea could be assessed as a serious challenge to the status quo in the region.

In my mind, this leads to 3 key questions to base any form of analysis from:

In order to understand the contention of the South China Sea and its significance, it is firstly imperative to understand the geopolitical importance of Asia, which has given rise to Chinese pre-eminence; enabling its rise to contemporary major political power on the global stage. The global focus of economic power has traditionally been centred over the west with the UK and the USA as the key contributors; however in recent years, this has shifted east (see Figure 1), with the main reason for this being rapid urbanization in developing countries, in particular China. As a result of this shift, China now seeks to control sea lines of communication, ensure national prosperity and continue economic growth and national greatness; the South China Sea plays a massive part in this.

What is the Strategic Importance of the South China Sea?

The South China Sea consists of over 200 tiny islands, reefs, shoals, atolls and sandbanks grouped in to 3 archipelagos – the Spratlys, the Paracels and the Pratas – Macclesfield Bank and Scarborough Shoal. The strategic importance of this, is mainly due to its geographical location, as the area is one of the world’s busiest and most strategic shipping lanes. More than 50% of world trade passes through the Strait of Malacca, the Sunda Strait and Lombok Strait over the islands and waters of the South China Sea amounting to around $5 trillion. More importantly, it also covers the most crucial energy routes for East Asian countries to transport oil and natural gas from the Persian Gulf. Therefore, the South China Sea has geopolitical and geostrategic importance for the energy and economic security of China and East Asian countries; but also for the USA as $1.2 trillion of its trade moves through the waters. In addition, it has proved oil and gas reserves, so the sovereignty of the disputed islands involves legal rights to exploit its resources. From a strategic perspective, the geographical significance is that whoever has dominance over it, dominates the future of East Asia.

In 2010, the US declared its freedom of navigation in the South China Sea to be a national interest in response to China’s increasingly assertive posture. In 2012, Vietnam and the Philippines sought to consolidate their partnership and alliance with the US in order to enhance their strategic position over South China Sea disputes. Therefore, the US plays a key role in influencing the resolution of the disputes. Vietnam and the Philippines have also attempted to form a ‘strategic alliance’ with Japan in their struggle with China in the South China Sea.

It is highly likely that China will continue to upset regional stability in the area to expand its own sphere of influence. The USA have a direct connection to the area through various allies, connections and trade, and this will naturally continue. Due to the strategic importance of the area, China will continue to establish a maritime power in as the most dominant player among states in the region. It remains entirely plausible that any Chinese strategy could have a long term goal of possessing the power to deny US or western warships access to the South China Sea, with China largely laying claim to most of the area as it’s own waters.

What evidence is there of an increased projection of power?

China has shown the most considerable increase in projection of power from all the states surrounding the South China Sea. It has increased its military budget by over 8.5% in recent years and this is likely to continue for the near future. China’s military modernization has included structural reforms establishing a Joint Operations Command and five new theatre commands (Northern, Eastern, Southern, Western and Central).

China’s significant increase in spending and capability of its maritime forces is of note. The isolationist China has never traditionally had a deep water navy, with a significant power projection capability; however the production of its first aircraft carrier (Liaoning) has been a noteworthy change from a ‘soft power’ in the land environment to a ‘hard power’ projection at sea stance. More and more, we see a particularly aggressive maritime stance from China towards NATO warships when exercising freedom of navigation through the South China Sea.

Since 2009, China has growingly asserted its influence by enforcing an annual fishing ban, conducting regular maritime patrols, undertaking scientific surveys and conducting military exercises in the disputed islands and waters. It has also been known to give its fishermen military training for years, but recently this has been reported as more assertive with fishermen helping to underwrite and enforce sovereignty claims by occupying territory at sea, carrying out surveillance and harassing other vessels under the guise of civilian fishing boats.

As sovereignty over the South China Sea involves China’s economic, energy and national security interests it is highly likely that the increased projection of maritime power will continue. If China can exert complete control over the region, using predominantly the maritime domain, it can build a significant strategic sphere of influence and power. Figure 3 highlights the influenced areas. No other state in the region can match this increase in projection and rival China due to the economic differences. The risk to Chinese power projection lies predominantly with US interests.

What countries are claiming sovereignty, and to what extent is this disrupting regional stability?

Several countries in the area, including China, Taiwan, the Philippines, Vietnam, Malaysia, Brunei and Indonesia, make overlapping sovereignty claims over the islands and maritime rights in the South China Sea. Figure 4 shows the overlapping sovereignty claims, with China’s claims according to the 9 dash line doctrine in red. The area marked with a blue line is based on the UNCLOS 200 nautical mile Exclusive Economic Zone (EEZ) relating to each country’s claims and the islands marked in green are the ones over which sovereignty is disputed

China’s claims over the legal status and maritime rights of the 9 dash line remain ambiguous and outside of UN recognised EEZ claims. In particular China’s maritime law enforcement in the disputed islands and waters has disrupted regional stability; causing tensions between Vietnam after a clash between Chinese patrol boats and Vietnamese oil exploration vessels. In addition, tensions have been raised with the Philippines after assertive Chinese naval patrols which they described as ‘aggressive action’. The most recent victim covered extensively by reporting is Taiwan.

Since 2014, China has stepped up the construction of artificial islands over the disputed Spratlys and Paracels in the South China Sea, causing an escalation of tensions, upsetting stability. These islands are large enough for military runways as well as SAM installations. China has constructed more than 3,000 acres of artificial islands, and although this is not illegal, it is an intimidating display of wealth and power. As building of military facilities continued in 2015, the US explicitly announced its opposition to these constructions and tasked surveillance assets to conduct over flights in the South China Sea which significantly raised tensions. This has continued in to the present day.

Final Thoughts & Looking Towards the Future

It is clear that increased power projection in the South China Sea, from the Chinese in particular, has upset regional stability, and this is likely to continue. It is unlikely that any states in the region possess the wealth and power to oppose this, although there is always a realistic possibility that they may receive backing from the USA if it is in their interests. With European geopolitics currently dominating our access to media, it would be wise to keep a watchful eye on geopolitics revolving around Asia and the South China Sea. As the continual pivot of economic activity shifts east towards Asia, it seems only inevitable that political, diplomatic and military power will challenge the North American and European dominance seen in previous centuries.