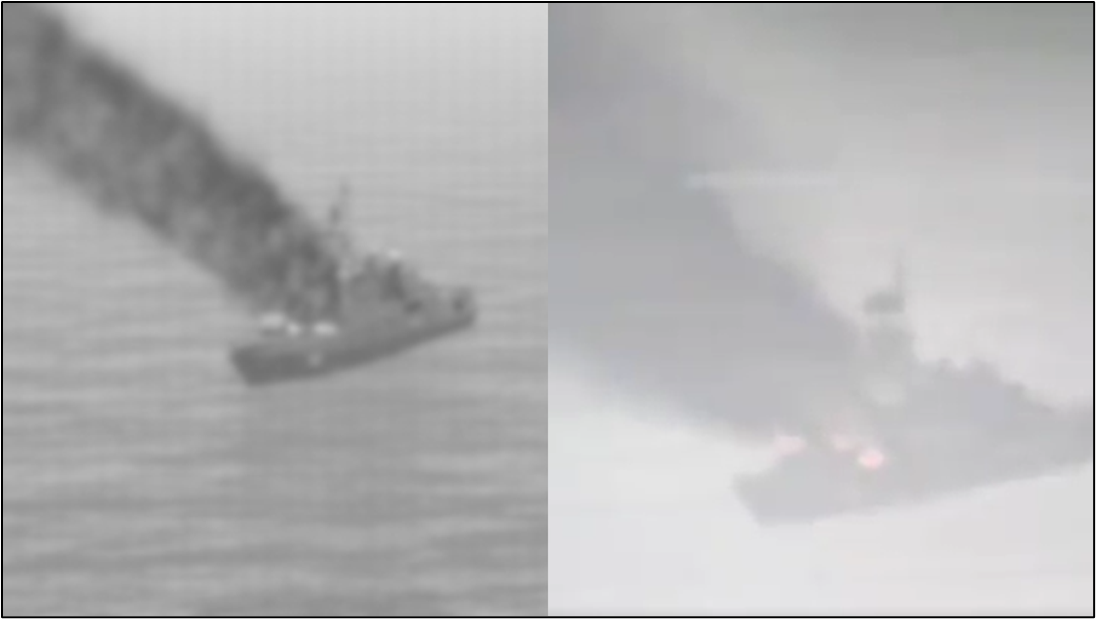 Was the Admiral Makarov Really Hit?

Rumours began to circulate in the mainstream media over the weekend that the Russian Admiral Grigorovich class vessel, Admiral Makarov, had been successfully targeted and destroyed. Many sources were quick to jump on this story claiming it had been verified and confirmed, however, little supporting evidence was shown. Geollect set out to do what they know best – challenge assumptions.

Initial reports claimed the vessel had burst into flames and was on fire after being hit by the Ukrainian anti-ship missile Neptune. A vessel the size of Makarov on fire would likely show up on NASA’s global fire map FIRMS (Fire Information for Resource Management System). A quick check of this source across the period 4th-8th May showed no initial signs of a significant fire in vicinity of Snake Island where it was reported to have happened, or in the wider geographical area of the Black Sea as shown at Figure 1. The red dots on the map indicate returned data. As clearly shown, many returns are evident in areas of land-based conflict, but no returns near Snake Island are shown as indicated by the red circle.

This is, of course, by no means definitive, so Geollect attempted to corroborate with HUMINT sources close to the conflict itself. These sources returned an assessment, as stated in our LinkedIn post on the 7th May 2022, that the vessel had not been hit and an ISR mission assessed that the vessel was near Crimea. Geollect analysed the available information in more detail to explore the plausibility of the claims around the Makarov being destroyed. One particular piece of so called ‘evidence’ was footage from an alleged drone showing the Makarov on fire. The footage was grainy and questionable. One of our analysts with a keen eye suggested that the footage looked very similar to a military simulator strategy game called Arma 3, with an active modding scene. Whilst it cannot be confirmed at this stage that this is the origin for the source of the video, a direct side by side comparison of the game and the circulating video is compelling when assessing that the ‘evidence’ is unreliable.

Geollect are awaiting a return of high-resolution satellite imagery from our partners to attempt to close this loop of speculation and misinformation. However, in the meantime, open-source optical imagery from Sentinel 2 Credit: European Union, contains modified Copernicus Sentinel Data 2022, processed with EO Browser shows a number of assessed Russian surface combatants active to the north western end of the Black Sea on 9th May, 2022. This includes an Admiral Grigorovich Class vessel heading east towards the Crimea assessed to likely be the Makarov based on direction of travel. Another Admiral Grigorovich vessel was assessed to be alongside in Sevastopol at the time. Based on reporting that the Makarov was in vicinity of Snake Island, this is most likely the vessel Admiral Essen. Location of assets is expanded in detail at Figure 3 on the next page.

Investigation is ongoing to determine with certainty the details around this incident, however, at present, the lack of concrete evidence leads to questions around the reliability of reporting. When comparing this potential loss of a significant high value Russian asset in the Black Sea, to the last loss of a high value asset in the Moskva, it also doesn’t correlate. When the Moskva was hit and sunk, the Russian Ministry of Defence responded within days to confirm the incident and the number of casualties, almost certainly to get on top of the incident in an attempt to control the narrative.  They provided further details, likely for worried families assistance in their bid to understand loved ones that may be deceased or missing. No such thing has happened with the Makarov incident which strengthens the assessment that current reporting is false around the vessel being lost. Geollect will continue to gather as much evidence as possible to get clearer answers on this situation and challenge current assumptions spreading like wildfire in the mainstream media.